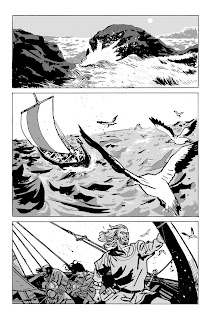 I thought this page was innocuous enough where my editor wouldn't mind. Also, I think it's a great example of one of the themes that ran through the first arc of the "Icelandic Trilogy" in Northlanders. One of the things that I felt Brian did so well in the scripts was give space to show the landscape that is Iceland. As much as the story is about a family and their struggles with making a life for themselves, it's also about this harsh land that didn't want to be occupied. It kind of reminds me of a Terrence Malick movie where the slow pans and wide countryside shots give you a real sense of immersion into their world. Hopefully, I was able to capture some of that in the issues. Space is always something that I'm concerned with when laying out comics. It's the main problem I run into when I read a script and I'm sure it's a headache to the writers. I find myself more and more just trying to divide the page in a way that gives the important moments there due rather then composing each panel within that page. I think Brian Wood was pretty great at having those moments in the script and I had fun trying to keep that impact on the page. 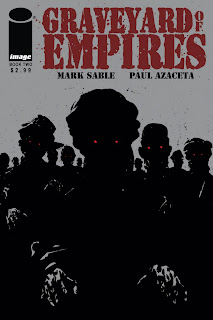 Seeing as issue #2 of Graveyard is coming out tomorrow I thought now would be a good time for an update. Now that Mark and I are looking more towards the end of the story rather than the beginning I'm really anxious to get to some very cool scenes we've set up. I always described the book as a ride that gets crazier as it goes and so what I get to draw now is off the wall fun. Look for the cover above and here's a couple of previews folks were nice enough to put up:

Also, I can't say enough cool things about the other book I'm working on, Northlanders. It's a shame it's not continuing because that means I won't be able to draw things like this anymore. 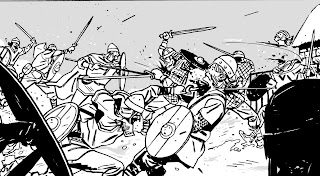 So back to work.

Posted by Azaceta at 6:04 PM No comments: 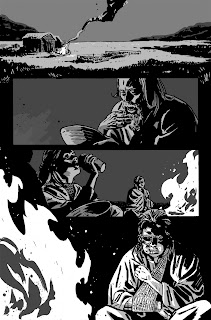 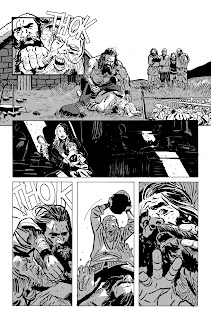 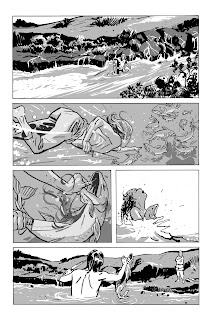 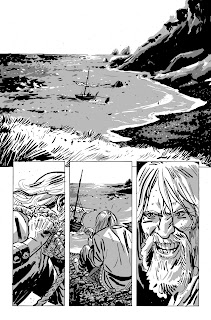 So I'm back from lots running around on planes and such. San Diego was great and the response Mark and I got from people (including some Military) was awesome. So glad they think we did them justice in Graveyard of Empires. It was a big concern of ours and a bit of a weight off my shoulders that I'm doing okay with the ref I have. Issue 2 will be out soon and it looks great. I actually already have my comps and I'll update everyone about the in-store date. Also, Northlanders #42 is out there and #43 is coming so I have a bunch of things out for people to see. I posted some pages from #1 since that's out and when #43 comes out I'll post some pages from there. I'm really into adding the grey layer now and I'm really starting to think about pages with that in mind. Without jinxing it I think it's the next step in my art and I'm excited I'm moving forward. Being stagnant with you own art can be the worst thing and I hope to never get stuck in my own style.