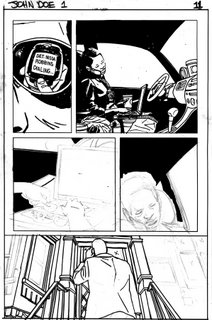 Wow! I've been knee deep in John Doe so I haven't posted as much as I want to. Here's an "in progress" page I was working on this week. It serves as an intro to one of the supporting characters in the book. Mark Waid has really delivered with this book and I hope people give it a look. He mentioned he really wanted to make the first issue something the reader can feel he got his moneys worth and I think he knocked it out of the park. It's a dense issue without feeling claustrophobic. My hats off to him. Maybe he'll teach me some tricks so one day I can actually give the writing side a shot..... Maybe if I pay him 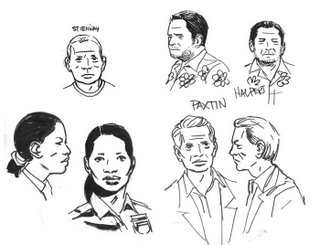 As I've said before I'm really trying to push the envelope on making distinct characters. At least with my own work. So when it came time to do some of the cast for John Doe I was determined to make them each there own person. What I've been doing lately is start with a celebrity or actor and find out what makes them distinct. Then try to duplicate that without making it a likeness. I really don't like doing likenesses (probably because I'm so bad at it) so I stay away from them as much as possible. In these sketches Paxtin was at first based on Steve Buscemi but then kind of went more into an older grumpy looking man. Steinway is based on Jim Norton who I think has a great face with great expressions that I hope to capture somehow. I'm also gonna try to really give them there own persona from the way they dress to the way the walk to even the kind of expressions they give. Hopefully in the future I can really make characters as distinct as real people and give a sense depth just in the visuals. I guess we'll have to what and see how that goes. 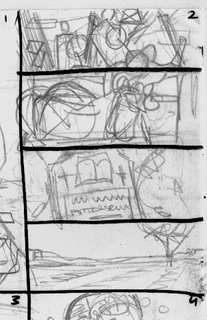 So here's a basic behind the scenes of how I approach a page. The first Image is my thumbnail for page 2 of John Doe. When doing a thumbnail I'm never concerned about getting a tight drawing. In fact it would be the exact opposite. I just try to lay down a basic composition and pick shots that best tell the story. That's it. Simple. When I get to the actual page is when I start to think about the drawing, where to lay blacks, and especially the acting. 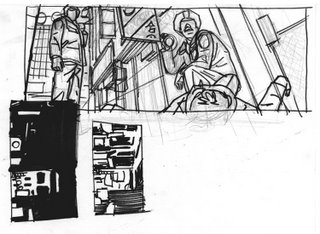 With the second image you can see that in the beginning I'm more focused on getting a solid drawing and less preoccupied with what the final drawing will look like. As in this panel I often draw on a separate piece of typing paper so I can be as loose and messy as I want. Then I'll quickly trace it over in marker for easy viewing through the bristol on my light table. THEN when I trace the basics onto the actual page I go straight to inks. I rarely do this but on this panel I was playing with maybe blacking out the buildings totally for that dark alleyway feel and you can see some quick sketches of that under the panel. . 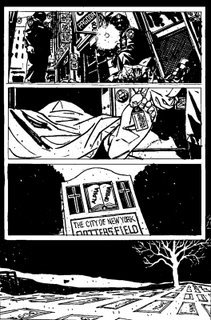 Here's where the fun starts and most of my time is probably spent. I really don't have any rules I follow (I used to but as I've gotten better at inking my own stuff they went out the window) except to make it look good. I use anything from a brush or brushpen to a quill pen or marker. A whiteout pen is invaluable since I seem to always be making mistakes. It also works for some effects like the light from the flashlight (which is a bit of smeared whiteout).
The first few pages are a kind of intro to the series so I kept that four tier layout with the three panels in the box. I think it worked so far and I'm pretty happy with them. I'm really trying to make each work better then the last. So that's a glimpse into my working process and I'll see if I can do it again. Maybe on a more complicated page so you can see the fun of storytelling problem solving.

Posted by Azaceta at 7:15 PM No comments:

Just wanted to throw up a quick post about CROSSBRONX. If you don't know about it then you've been living under a rock. Mike Oeming and Ivan Brandon have gotten together to bring you a compelling story about crime, gangs, and santaria. If you like Oeming on Powers you'll love him on Cross Bronx. He's really kicking ass and drawing his balls off for this book. Ivan's not slacking either when it comes to the noir feel. The pacing is great and the lush storytelling is top notch. GO get it now!!

Why am I going on and on about someone else's book? Because they were nice enough to print my pin-up in the inside back cover of issue #2. Here it is and I'm working on getting this John Doe stuff up so stay tuned. 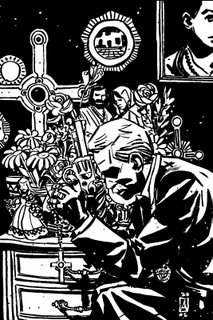 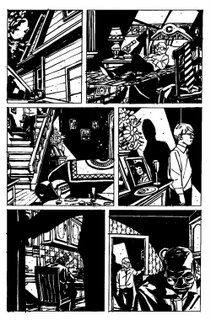 I never understood comic artists that say they only want to draw the "action". The fun for me has always been the problem solving. How do I make this read clear? How can I add drama to this scene/panel? How do I make this interesting? I have just as much fun (if not more) making a great character moment happen then drawing Spider-man punch Doc Ock threw a wall. I get excited when I have two people talking in a room with nothing going on. Picking the right camera angles or staging the "actors" to bring the dialogue across is amazingly fun. It's the little character moments that I try to capture. Like in The Godfather when Al Pacino is telling his brother-in-law his punishment. The way he sits, legs crossed, and picking at his nails. All the while you can feel his power and viciousness. That's fun! I'm not sure I've really succeeded in that but it's something that keeps me going and why I love drawing comics. So like I said, I never understood some artists.

Speaking of artists. We had the unfortunate luck of a great (perhaps greatest) comic artist pass away recently, Alex Toth. I finally got a chance to pick up The Alex Toth Doodle Book . I haven't even been able to fully read it yet because I keep getting side tracked by the illustrations. It's an amazing book about an amazing artist. I'm not sure what to say that hasn't already been said to death. Here's a small homage to Mr. Toth. It's a few quick sketches I did recently while trying to train myself to draw different and distinct people. Toth was known for filling a page with these quick doodles that rivaled in skill what others spend a lifetime trying to achieve. I know mine isn't as good but I gave it a shot damn it! 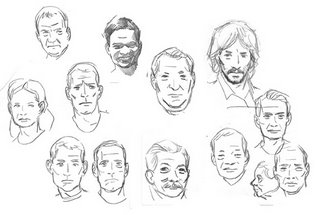