I suck at the internets.... 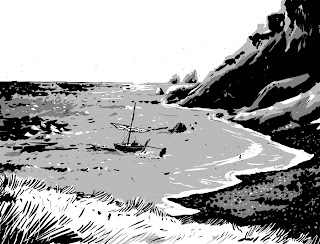 Or so I've been told recently. I guess I believe it because here I am a whole month (or more) later before I throw up another update. I have been pretty busy and I have that excuse to fall back on but in the end perhaps that person was right about me.
The reason I've been so busy is my two latest projects collided and I've been working hard to get both out the door. Graveyard of Empires #1 is coming out soon and it was alot more work getting that together than I originally thought. The rest of the issues should go smoother but the all important tone setting first issue was a real trial. Look for it June 15th and hopefully Mark and I will be doing a signing in New York for the release.
The other book is Northlanders which I couldn't be more pumped about. I've never worked with Brian Wood before and when the opportunity came up I jumped at the chance. I only have the outline and first bits of the story but it's already promising to be epic. Which brings me to the art attached here. I've been thinking alot about the final product, thanks in part to working on my own book, and it's changing the way I approach my art. There have been many times before where I just did my job handed in my inked pages and crossed my fingers. So in an effort to see something in print closer to what I have in my head I started adding some grays and tones to the pages. I added some purely digital bits (like the shoreline and some of the mountains) and other odd and ends to give the colorist (in this case, Dave McCaig who's done a wonderful job on the series) a much better starting point. It's an experiment and I may abandon it halfway through but it's a step in the right direction. That's all for now but more soon.... really.
P.
Posted by Azaceta at 1:06 PM 2 comments: